A fun group of 18 paddlers met at Royston waterfront to start our journey. Our Flotilla consisted of 16 kayaks, 1 double kayak and 1 exquisitely outfitted foot-peddling fishing boat. The tide was very low and most of us were able to drive quite close to the water to unload our kayaks and prepare for our tour of the day. The sun was bright and the water was calm making for a very good start. 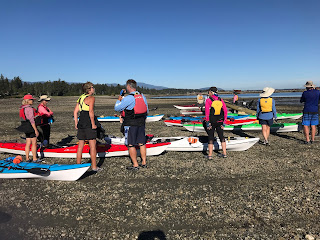 We edged our way towards the 13 hulls (Ghost Ships) that were sunk, beginning in the late 1930s, for a breakwater for the log booms that used the Royston area for collecting before towing to the mills. This breakwater helped prevent storms and tides from breaking up the idle log booms. Canadian warships, windjammers, tug and harpoon boats were decommissioned ( no KAYAKS though) and scuttled to build the breakwater. 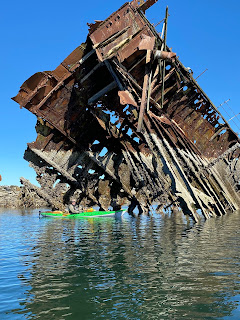 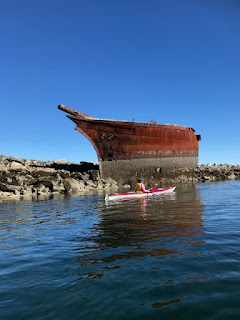 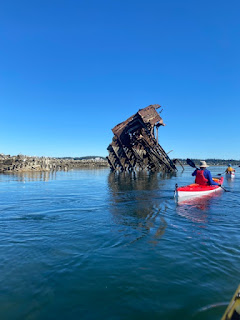 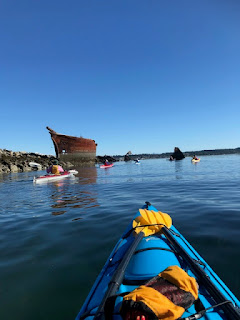 A total of 12 paddlers launched from the Deep Bay Spit, 10:00 am sharp, with the goal to circumnavigate Chrome Island and explore the southern tip and coastline of Denman Island. A warm summer day with inland temperatures expected to reach close to 30 degrees celcius, along with very calm winds and favourable tides set up the perfect conditions for a pleasant day on the water.  After signin, orientation and a few paddling tips, 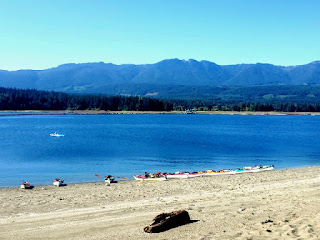 the group gathered together to cross the Baynes Sound channel over to Denman Island. 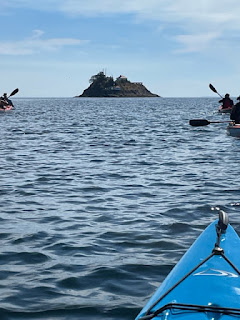 Heading southward, we explored the rocky coastline of Denman, to the remarkable views of several colonies of sea lions and seals sunning themselves on the low tide exposed rocks and frolicking in the warm waters, eventually reaching Chrome Island. 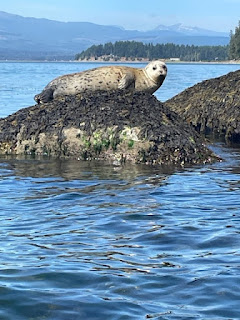 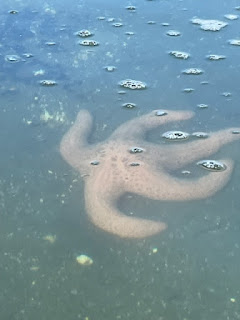 Read more »
Posted by Jim Swanson at 9:40 AM No comments:

Our Ladysmith harbour to Elliot Beach paddle was a very hot day (starting at 22 degrees and finishing at 29 degrees). There were 23 souls that decided to brave the heat. 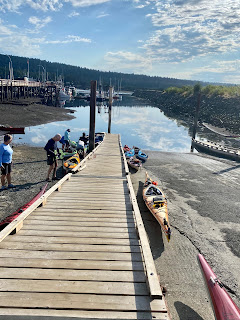 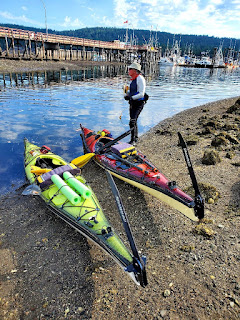 After a brief historical talk about the area to be paddled, we set off from the Ladysmith Fisherman’s Wharf at the usual time 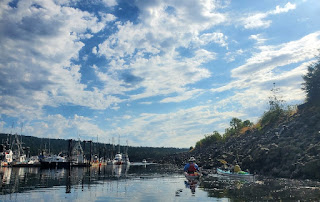 and made way for the gap (denoted by the 49th parallel marker) between the Woods Islands in the hope that we would be able to get through and witness the log boom formation activities on the far side. Unfortunately, the low tide level prevented us from doing so, and we therefore took the shoreline route along the West side of the Woods Islands instead. 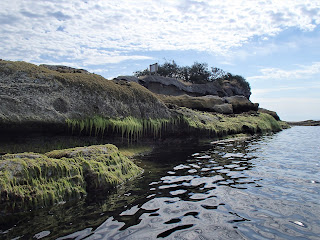 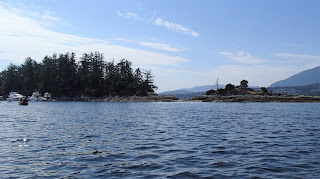 It was a beautiful hot day when 16 kayakers set out from Cedar boat launch for their bimonthly paddle – waters were mostly calm with a slight northwest breeze, the skies blue, and the enthusiasm high with anticipation of another great paddle.  Conditions could not be better and we were heading to Pirate’s Cove at the south end of DeCourcy Island.  Whether looking for buried treasure, or wanting to see where Brother’s X11 had his cult followers sequestered, or just wanting a another paddling adventure, the stage was set. 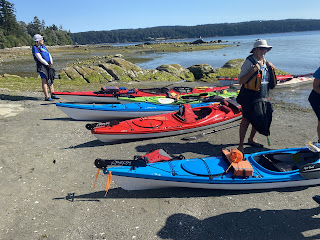 We headed across Stuart channel to the bottom of Link island where there is an opening called “hole in the wall” -  one can scoot through a narrow passage when the tide is half up or higher.  The passage was high and dry when we got there as it was nearing low tide.  Stuart Channel can be busy with power boats but wasn’t too crowded with Tuesday being a weekday and not on the weekend.  Link and parts of DeCourcy Islands have sandstone cliffs going up from the water’s edge making it a spectacular scenic view if using one’s imagination to look at the carvings made from centuries of wind and water against the cliffs.

Read more »
Posted by Jim Swanson at 1:27 PM No comments:

13 kayakers met at the Comox Boat launch on a sunny, warm summer day. The water was calm, as we paddled along the shoreline after launching at 10am. There were no mishaps or delays getting everyone on the water.

Paddling counter clockwise, we passed older cabins/cottages passed from one family to the next, 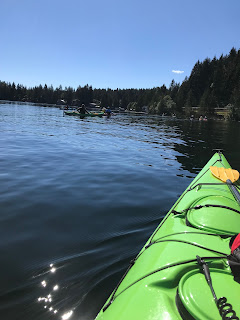 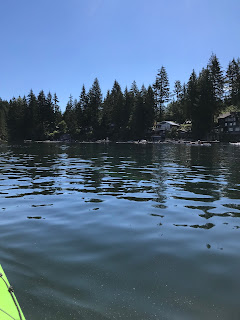 as well as a site where mining and logging took place. 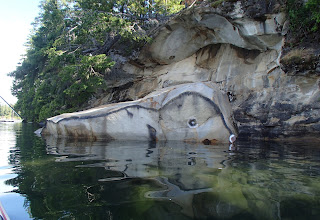 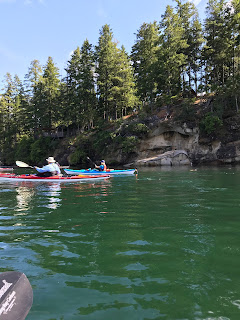 Besides being the reservoir for the Courtenay and Comox water supply, Comox Lake is also the water supply for the BC Hydro Puntledge Generation Station. The lake was at one time an important means of transporting logs – you can still see the pilings that were used in the log booming areas.

I refer you to the following site for history of the lake:

Cumberland Museum - Up the lake (an interesting article)

Despite an unseasonably cool and wet summer and having to previously reschedule, 18 adventurous paddlers showed up for the Nanaimo Paddle. 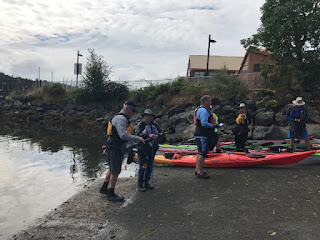 The original plan was to circumnavigate Protection Island and explore the Nanaimo Harbour, but by the time we were ready to launch, the Kayaking Gods rewarded us with a high tide, clearing skies, mild temperatures and little to no wind ... perfect conditions to reconsider a more adventurous trip. 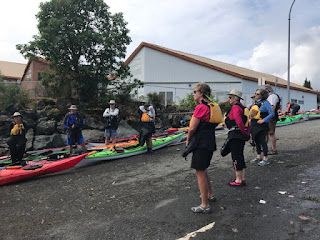 Putting it to a unanimous vote by all paddlers, a decision was made to circumnavigate Newcastle Island.

Once in the water, we proceeded westwards towards Departure Bay. Rounding the corner, we could see one ferry in the Departure Bay Terminal with another ferry coming into the channel.

Special care was taken to make way for several float planes taking off from the water. 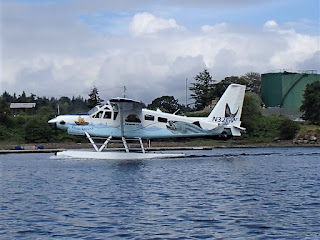 Traveling up the west side of Newcastle Island, where winds and waves can sometimes be testy, we experienced very mild calm seas make it a very pleasant paddle.
Read more »
Posted by Jim Swanson at 10:21 AM No comments:

16 Paddlers in 15 kayaks and 1 canoe started off from the Courtenay Marina Park under sunny conditions. We immediately started upstream on the Puntledge River to explore the Kayak Launch area near Lewis Park and the 5th Street Bridge. The current in the river was running quite strong so we soon decided to head downstream towards the estuary and the Comox Marina.

We followed the main channel of the river marked by navigation signs that indicated a narrow channel in the river about 300 metres downstream of the launch site where the current was fast for a short run. The pylon supporting the navigation marker had caught number of logs. In attempting to maneuver through the log jam one paddler flipped over. They safely floated downstream and were able to exit the river on their own. Two others attempted to avoid colliding with the person floating in the channel. They collided into the logjam, their kayaks jammed together and were held against the logs by the force of the current. One of them tipped out and a quick thinking participant helped them get back into their kayak. Six paddlers in a passing outrigger canoe attempted to free the two kayakers but their boat was caught by the force of the river and became jammed up as well. The Fire Department was alerted. They worked with Comox Valley Search and Rescue Services who affected a rescue with no injuries sustained by anyone.

·       Listen to and follow safety instructions provided by event leaders at the launch site;

·       Fasten your PFD completely and leave it fastened while paddling;

·       When paddling as a group in a river follow the path of the leader;

·       Paddle in single file, not in social side-by-side alignments;

·       Maintain space between boats to allow for manoeuvring;

·       If a stationary object, pylons sweepers or log jams, appears downstream be aware it is necessary well in advance to manoeuvre into a path that will allow you to avoid colliding with it.

·       Make sure your spray skirt fits snuggly but comes off easily;

911, the Courtenay Fire Department, RCMP, and especially Comox Valley Search and Rescue Services served our situation professionally and expertly. We will be sending a Thank You note to these organizations.

Read more »
Posted by Jim Swanson at 9:14 AM No comments: